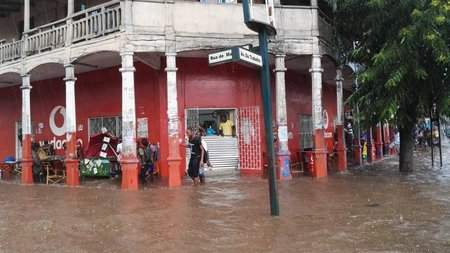 The African Water Facility (AWF) grants €1,8 million to Mozambique to finance a development plan and feasibility studies for urban sanitation, drainage and solid waste management in Chimoio and Inhambane. The 310,000 inhabitants of the two municipalities are facing serious sanitation and urban flood issues.

Objective. “The studies will pave the way for investments aimed at improving climate resilience and health in the two municipalities. This will be achieved through improved services in sanitation, drainage and solid waste management. Not only will we reduce the risk of flooding but we will also improve people’s health. The Development Plan covering the next 20-25 years will lead to increased investments in climate change adaptation, specifically in sanitation, drainage and solid waste management infrastructure and services, to the tune of €30 million by 2020,” said Mohamed El Azizi, AWF Director.

Recurring floods. Mozambique is affected by recurring floods. This is caused by a combination of insufficient storm water drainage, river overflowing and sea intrusion during storms. Sanitation coverage is low in Mozambique. In urban areas only 55-60% of the population has access to sanitation services. In recent years, this has been aggravated by declining support allocated to sanitation services. The situation is even worse in Chimoio and Inhambane, where child mortality is high (58 per 1000 in Inhambane and 114 per 1000 in Chimoio area, as against a national average of 89.7 per 1000). The old piped drainage system in both municipalities has collapsed. Some households in central parts of town have connected their waste water system to the drainage system. Most rely on septic tanks, and in the less densely populated areas other on-site systems are used – latrines. Only the most central parts of town have some solid waste collection.

The study will apply the principles of IUWM. The Integrated Urban Water Management (IUWM) has been identified as the best option to address on a pilot basis the needs of these secondary cities. The IUWM approach is a development process that encourages cities to adjust certain practices of planning and effective management, taking into account their own realities and their local socio-economic contexts. Under this approach, wastewater and faecal sludge are considered as potential resources. Indeed, grey water can be reused for irrigation of green areas, urban agriculture and industrial processes, according to the regulations on the use of wastewater. In addition, nutrients can be used for the production of fertilizers, or for energy production (methane, biogas), fuel production (dried sludge). Sanitation and wastewater management are seen from a perspective of creating business opportunities (and not only as technical options), that can generate income, employment, positive impact on the environment, and improvements on the habitat and quality of life.

Project execution. The total cost is estimated at €1,782,800 and AWF’s share is €1.6 million. The Global Water Partnership’s share is €80,000, and the monetary contribution from the Republic of Mozambique is €102.800. This funding is expected to generate 20-fold follow-on investments. The project will be implemented over 22 months including 14 months for technical studies and 6 months for the Environmental Social Impact Assessment (ESIA).