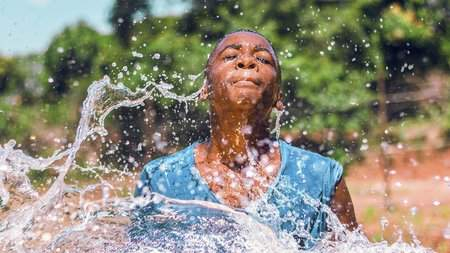 Background: In 2012 Sierra Leone experienced a rather severe outbreak of cholera, affecting over 5,000 people with 63 deaths in the Western Area from January to August 2012. The outbreak brought into sharp focus the magnitude of the task at hand of making safe clean water accessible to the people.

In Freetown, the average daily output of Guma Valley Water Company (GVWC), a company owned by the Government and Freetown City Council that provides water supply services to the city of Freetown, is app. 70,000m3 per day as against a daily estimated demand of 130,000m3 per day. Water is rationed to many areas in the City with almost no customers getting 24-hour supply. In the peri-urban areas and the densely populated poor urban areas customers receive supplies once a week or none at all. National targets for water supply and sanitation are 74 % and 66 % respectively, as stated in the National Water and Sanitation Policy.

While in terms of coverage the targets have been achieved, the actual situation with regard to system performance is different. The current status of most functional infrastructure in Freetown is to be characterized as aged and of insufficient capacity to cover current demand. Guma valley dam and network have been designed for approximately 300,000 people, serving currently approx. 1 million, a figure which is expected to rise up to 2 million in the foreseeable future. The majority of the distribution network dates mostly from 1961, with only one pressure zone for the entire network. While 300 to 400 leakages per month are being repaired, still many leaks are obvious throughout system. Furthermore, bundles of small diameter service pipes/connections often extend for hundreds of meters due to the limitation of the distribution pipe network.

With regards to water resources, the current and potential future catchments are located in the Western Area Protected Forest Reserve. This area could provide sufficient resources for the water supply of the entire peninsula but catchments are threatened by erosion/degradation, inadequate land use management, including the issuing of building permits for publicly owned land, including GVWC assets. Government has also prioritised the alternative of the largest river in Sierra Leone (Rokel River) as a future source of water for the capital city.

Goal: The overall project goal is the preparation of effective and efficient short and medium term investments into the water supply system of Greater Freetown. The project’s immediate outcomes will be twofold: 1) activities in and related to water resources management in Freetown are being coordinated among relevant stakeholders and 2) Investments for Greater Freetown (including the proposed new airport and satellite city) Water Supply and Sanitation Improvement and Expansion can be mobilised. These outcomes will contribute to sustainable human development through reduced water borne disease incidence and infant mortality.

Activities and Implementation: The project will provide three main outputs:

Recommendation: Based upon a critical assessment of the relevance, effectiveness, and sustainability of the Project, as well as the credibility and capacity of the Implementing Agency, it is recommended that a grant of € 1,985,500 from the AWF be extended to the Republic of Sierra Leone for the implementation of the project described in this appraisal report.